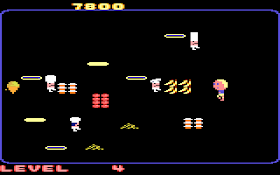 Genre: Action
Perspective: Top-down
Visual: Fixed / Flip-screen
Gameplay: Arcade
Published by: Atari Corporation
Developed by: General Computer Corporation
Released: 1987
Platform: Atari 7800
At the carnival, there are many contests and games, but Charlie is attracted only by one - Throwing Food. Depending on the complexity, Charlie has 3 to 8 attempts, and two to four opponents, cooks: Angelo, Zorba, Oscar and Jacques. You need to throw them with tomatoes, bananas or something else, run to dessert and eat it.
Atari 7800 Food Fight ported flawlessly, and everyone agrees that this is the best game for the Atari 7800, released in the last century. And Food Fight was written back in 1984!
‹
›
Home
View web version