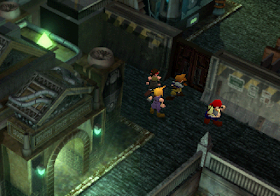 Before swap CD, save state to file, next CD, upload save state file.
Genre: Role-Playing (RPG)
Perspective: 3rd-person
Visual: Cinematic camera
Art: Anime / Manga
Pacing: Real-Time, Turn-based
Setting: Cyberpunk / Dark Sci-Fi, Fantasy, Sci-Fi / Futuristic
Published by: Sony Computer Entertainment America
Developed by: Square
Released: 1997
Platform: PlayStation (PSX, PS1)
Many players believe that the game Final Fantasy VII, released by SquareSoft, is the highest achievement of 32-bit gaming equipment in the RPG genre. Before you unfolds a panorama of fantastic combat adventures, familiar to many of the previous games from this series. An important technical solution for developers - to change media from ROM cartridges to CD-ROMs (the game is released on 3 CD) - has allowed them to realize fundamentally new opportunities for organizing a game action and achieve stunning visual and audio effects. Your fascinating adventures begin (after a leisurely and very colorful introductory story) in the mystical city of Midgar, where you lead a team of dashing guys performing special tasks to fight terrorists. When the fight begins, the image on the screen becomes especially tense: on it appears that city map, then the hottest points of the battle ... Before you unfolds a panorama of fantastic combat adventures, familiar to many from the previous games of this series.
A lot of fights in the game, enemies attack your heroes continuously. But, of course, your fighters are far from defenseless; they are able to hit enemies with both conventional weapons and magic spells. For example, the beautiful Elis (Ealis) with the help of charms can defeat the terrible Leviathan, possessing a destructive weapon - huge tsunami waves. Characters move (or even run) through the beautifully looking streets of the city, interact with passers-by, engage in armed conflict with gangsters, as well as with demons and other mythical creatures. Your game skill should be manifested in rummaging through all the back streets of the city, trying out all possible attacks of your characters and understanding what magic tricks you need to use in certain situations.