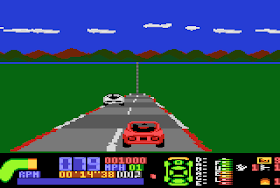 Genre: Action, Racing / Driving
Perspective: 3rd-person
Gameplay: Arcade
Setting: Post-Apocalyptic, Sci-Fi / Futuristic
Published by: Atari Corporation
Developed by: Sculptured Software
Released: 1987
Platforms: Atari 7800, Atari 2600
2089 year. The clash with the comet shrouded the Earth with a deadly radioactive cloud. Those who did not die immediately have a small hope of survival, in their hands is their salvation - the newest vaccine against radiation. You need to leave the protected fort of Albagon and go on a trip. The vile minions of the new regime will make it hard, because in order to rule the planet, they also need a vaccine! Every car on the road carries death, and the only way to survive is to send its driver to the next world before they send you. If luck is on your side, and the launch codes are not forgotten, a rocket launcher awaits at the end of the road. A satellite with a vaccine, launched into orbit, will neutralize deadly radiation. Good luck, the future of mankind is in your hands!
Atari 7800: The racing game Fatal Run in many ways resembles Pole Position, but instead of overtaking other cars, they must be blown up! At each stage, you always have the same task - to get to another city in time. At the disposal of the driver are effective weapons and various tricks. Graphically the game is similar to Pole Position, but better, beautifully drawn hills and valleys diversify the gameplay. The race is interesting, made on conscience, but they did not really like me.
‹
›
Home
View web version