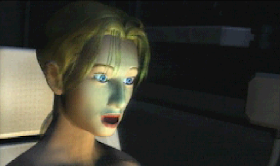 Before swap CD, save state to file, next CD, do not upload save state file, do not restart emulator, the game will continue automatically, save state to file again.
Genre: Action, Adventure
Perspective: 1st-person
Gameplay: Puzzle-solving, Shooter, Stealth
Narrative: Sci-Fi / Futuristic
Narrative: Horror
Published by: SEGA of America
Developed by: Warp Inc
Released: 1997
Platform: SEGA Saturn
Fantastic horror adventure from the company WARP - the creators of D no Shokutaku.
Events Enemy Zero occur in the distant future. On board the space station "Aki" entered a creepy monster - and began to kill all the crew. Playing the role of a young girl named Laura, we have to try to destroy the monster and escape from the station. But this will not be so easy: the fact is that the monster is completely invisible to the human eye!
As for the gameplay - Enemy Zero combines two types of game mechanics. The study rooms performed in the FMV-adventure format like D no Shokutaku. But walks along the corridors are made in the form of 3D labyrinths with a first-person view. We have to run through these labyrinths from the monster - and since the monster is invisible, it is necessary to be guided exclusively by hearing. And if the monster hits us at least once, it will instantly kill us. Thus, the "corridor" sections are a cross between HellNight and Silent Debuggers.
An interesting fact: in the work on Enemy Zero took part Fumito Ueda - the future creator of Ico and Shadows of Colossus (at that time he worked in WARP).
‹
›
Home
View web version