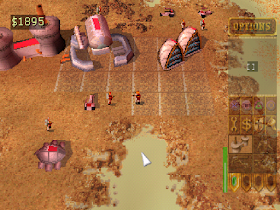 Genre: Strategy / Tactics
Perspective: Bird's-eye view
Visual: 2D scrolling, Free-roaming camera
Pacing: Real-Time
Interface: Multiple Units / Characters Control, Point and Select
Setting: Sci-Fi / Futuristic
Narrative: War
Published by: Westwood Studios
Developed by: Intelligent Games
Released: 1999
Platform: PlayStation (PSX, PS1)
"Your battle for Dune begin ... now!" - gamers with experience will remember how their heart beat faster, when they heard these words. Yes, the old kind Dune 2 - the ancestor of the most popular nowadays genre. The game, released in the distant gray-haired 1992, for many years holding the position of the greatest hit. Yes, now from the real-time strategy breaks trays on flea markets and shelves in computer stores. But then, in the 92-m at IBM, what a shock this game caused: bright graphics, support for digitized speech and stunning music, a wonderful movie clip and, most importantly, incomparable gaming interest. Only after going through the game for all three warring parties, gamers wiped the sweat from his forehead, but after a while again started the battle for Dune.
Dune 2 was one of the first strategies translated into set-top boxes, and really a real-time strategy, and even more so. PC-gamers were lucky - soon followed by the advent of Warcraft, which differed from Dune fantasy entourage and support for the game on cable and modem. Warcraft was actually as popular as Dune, and its sequel - Warcraft 2 (the game is also released for SONY PlayStation) - even surpassed the popularity of Dune 2. The latter still continued to be a classic of the genre. Well, then the famous Command & Conquer, Red Alert (also appeared on the SONY PlayStation) and the mass (at IBM) of less famous representatives of the dynamic strategy genre followed.
The firm Westwood Studio - the creator of Dune - has been receiving piles of letters from fans all the time, with the demands to release Dune 3, not C & C, not Red Alert, not Tiberium Sun, namely the third Dune (by the way, the first Dune was released a little earlier quite different firm and was an adventure game based on the novels of Herbert). But alas, the Westwood company instead of the third part decided to take a rather bold step - to release that most famous second part again. Before Westwood there is an example of the company of George Lucas - in 1997 Lucas Arts released remakes of the famous trilogy Star Wars - the scenes in each of the films were drew or slightly altered on computers, the sound was cleaned, the films themselves seemed to remain the same, but queues were queued at the cinemas. Similarly, Westwood Studio did with its famous Dune 2 - the graphics engine from Red Alert, the newly redrawn units and buildings (and their set, of course, has not changed in comparison with the original), extensive video clips between missions in the spirit of Red Alert and C & C, and in everything else - all the same Dune 2.
Of course, the changes also affected the management - if you remember, in the good old Dune you could not combine all (or at least nine pieces, as in Warcraft 2 on PC) combat units into a unified summary division and throw them at one point of the map where they should arrange hell on earth. No, every combat unit you had to give a separate order, and clicking the mouse on the corresponding icons - move, stand, attack. Remember how you had to suffer, starting a decisive assault on the enemy base with all available forces. Of course, there will be no such disgrace in Dune 2000.
The missions for each of the belligerents will be about fifteen, and the video clips between the missions (in which noted eminent actors, for example, John Riss Davies, the Russian viewer perhaps he remembered as a professor from the series "Journey to parallel worlds") tell you about the development of the plot games. The changes are poking and artificial intelligence - remember how the enemy infantrymen were touched alone with an enviable regularity, attacking your completely rebuilt base? In the new Dune, the computer is much smarter and more cunning.
‹
›
Home
View web version