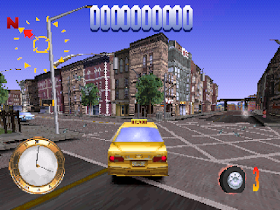 Genre: Action, Racing / Driving
Perspective: 1st-person, 3rd-person
Gameplay: Arcade, Shooter
Published by: Fox Interactive
Developed by: Probe Entertainment
Released: 1996
Platform: PlayStation (PSX, PS1)
After the noisy success of Alien Trilogy, the film company "XX Century Fox" granted EA a license to create games for another popular movie trilogy - "Die Hard", starring Bruce Willis. Without dumping three films with very different stories into one heap, the developers of the game (the company Rrobet) created three different games based on the three adventures of the New York policeman John McClean. His battle with Hans Gruber in the skyscraper "Nakatomi" was a game with shooting, similar to Loaded. The siege of Dallas airport - the basis of the plot of the second film "Die Harder" - turned out to be similar to the game Virtua Sor. Finally, when Simon, brother of Hans Gruber, returns to avenge his death and wants to blow up several important objects in New York, you find yourself in a race game, something reminiscent of Twisted Metal.

In the first film, McClane faces a well-known gang of terrorists under the command of Hans Gruber, who, allegedly for political reasons, seizes the cellar of Nakatomi Corporation to steal money from the safe there. Entering the lobby, the gang rises to the 31st floor, where employees arranged a party before departing for the Christmas holidays. A New York policeman happens to be inadvertently besieged by them - he came to see his wife working there - and begins a one-on-one war with Gruber and his henchmen. The battlefield is the numerous corridors and crossings of the skyscraper.
The game as a whole follows the plot of the film, but the Gruber gang is enlarged - it is no longer a dozen, but several hundred people. This allows you to make a stunning zavaruhu. Approximately as in the games "Loaded" and "Chaos Engine", the player must conduct McClean through fifteen levels (making up the entire building), using against any scoundrels armed with Uzi guns, any weapons that fall under the arm. Recreated the premises in which the action of the film takes place: You have to fight with bandits in the strategic office of Kataga, and in the underground garage, and, finally, on the roof of the building.

When McClane met his wife at the Dallas airport the next Christmas, he was again "at the wrong time in an inappropriate place." This time he got involved in the story with an attempt to free the evil dictator. A gang of terrorists seized the airport management services and stated that it would be one to blow up all the planes, if they did not meet their demand - to release the accursed general. And one of the first on their list was the plane on which McClane's wife was!
Demonstrating the enormous capabilities of the PlayStation system, the developers from the company Rrobe made a game like "Virtua Cop" based on this film. The player leads a cross-shaped sight on the screen, and the panorama of the airport unfolds before him, and the "camera" automatically turns up and down so that possible threats can be seen. Objects and figures of terrorists are made in polygonal technique. The attackers are destroyed by powerful explosions. The final battle is unfolded around the plane, on which the general and his people are about to leave.

Die Nard With A Vengeance

One morning, New York awakens from an explosion that Hans Gruber Simon's brother produces in one of the business streets. He requires McClane to execute a number of rather strange orders: to walk through Harlem with a racist slogan on his chest, drive through New York in a supposedly hired car for this, and finally rummage through the sewer system in search of him, Simon, who "covered up the blast "he committed a daring stealing.
Developers from Rrobe chose as the core game car chase, which occurs in the middle of the movie. The player seems to be driving a yellow taxi and, circling the business districts, should look around in search of Simon's bombs. The palpation is performed with the help of a large indicator searcher. The main goal is to neutralize the explosives before the explosion takes place. Meanwhile, around scurrying carefree passers-by, self-assured drivers and there is much more, why the task becomes very difficult.