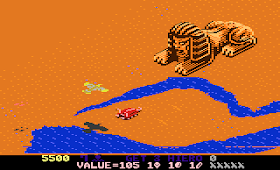 Genre: Action
Perspective: 3rd-person
Visual: Isometric
Gameplay: Arcade, Shooter
Published by: Atari Corporation
Developed by: Atari Corporation
Released: 1987
Platform: Atari 7800
Desperate desolate treasure hunts!
Everything that you see around you is boundless desert, lonely standing ancient obelisks and pyramids floating in the frozen, hot air. Legends that have brought you here for 3000 years. They describe the thieves who plundered the tomb of the pharaoh, the camels, laden with huge bags of gold, silver and precious stones, and their flight through the desert. But at night, the terrible inhabitants of the desert pursued the robbers, and the priceless treasure was scattered and lost. Even the camels were not found ... Now you are here. A sharp eye already sees in the distance jewels glittering in the sun, and he did not hide those who were approaching from afar. You can turn around and be safe. Or you can continue and try to collect the jewels of the pharaoh.
This exclusive for Atari looks like Zaxxon in the desert, with some elements of strategy. The falcon, shooting arrows, flies through the desert. On the sand scattered symbols, collecting three of the same, you can get some power-up, and activate it with the right button. In fact, that action game is that the strategy in the game is lame. The height can not always be calculated correctly, and power-ups can also do much harm (for example, by increasing the speed of the flight). As an alternative to the brake - I advise you to take off and land, it slows the game. Everything is painted decently, but the colors are not ordinary. Desert Falcon did not succeed as he thought.
Curiously, Desert Falcon was made back in 1984, and she saw the light a few years later.
Other game titles are Nile Flyer, Sphinx
‹
›
Home
View web version