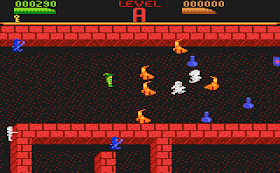 Genre: Action
Perspective: Top-down
Visual: Fixed / Flip-screen
Gameplay: Arcade, Shooter
Published by: Atari Corporation
Developed by: Atari Corporation
Released: 1988
Platform: Atari 7800
Dark Chambers is a labyrinthine adventure game. It is necessary to collect treasures, climbing as deep as possible into the cellars of the castle, and to shoot out all the evil spirits that these treasures guard. The game is very similar to Gauntlet. Do you think this is a clone of Gauntlet? But no, everything was exactly the opposite.

It all began in 1982, when Jack Palevich, at the time, a student at the Massachusetts Institute of Technology, wrote the game "Thesis of Terror" for educational purposes. The game noticeably affects the D & D, although the author of the game at that time in D & D did not play. Thesis of Terror is a labyrinthine game for 5 players. Four people played on the computer Atari 800, and the fifth "sat" on the Hewlett-Packard Pascal Workstation. The fifth player was never implemented, and the server just sent new cards to Atari. Joel Gluck, who painted a couple of levels and gave a few ideas, joined the development. Later, already in the walls of Atari, Jack Palevich continues to work on the game. In 1983, it is already called Dandy (the word D & D sounds like this), the fifth player is deleted, instead of him all the cards are stored on the disk. Atari Program Exchange (APX) even sells the game (mail order). A couple of years later, the programmer from the arcade unit Atari Ed Logg and his team release Gauntlet. In general, the game was a copy of Dandy, the differences were not so significant, and John Palevich, at that time already retired from Atari, shows his rights and requires that he entered into the developers of the game. Manual Atari considers it unacceptable to flashing all the ROMs. In the end, agreed that John Palevich received a gaming machine Gauntlet as a gift. Later Palevich will sell its rights to Dandy to the British game developer, Electric Dreams Software, which releases versions of the games for the ZX Spectrum, Commodore 64 and Amstrad CPC in 1986. The game turned out more clone than Gauntlet than Dandy, so, then there were trials with Atari.
In the late 80's Atari again trying to enter the game console market, and makes a new game, similar to Dandy - Dark Chambers. True, the game is more like Gauntlet than the original. Dark Chambers appeared on Atari 2600, Atari 7800 and Atari XE in 1988. This version allowed only two players to play at the same time. Other differences from Gauntlet (naturally, for the worse): there are no specializations of the characters, there are not many chips that give special abilities, weaker levels, there is not that arcade excitement. Up to the level of 1988 the game does not hold out, alas.
‹
›
Home
View web version