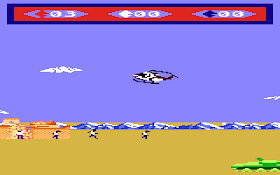 Genre: Action
Perspective: Side view
Visual: 2D scrolling
Gameplay: Arcade, Shooter
Vehicular: Helicopter
Published by: Atari Corporation
Released: 1987
Platform: Atari 7800
Well, have played enough already in the Pacman, and other children's games? Do you want something serious? Then jump at the helm of the rescue helicopter and do not say then that you forgot to buckle up! The task at Choplifter is quite complicated. Let's move to the non-existent Bungeling empire, which, apparently, occupied some islands in the Middle East. 64 delegates were kidnapped directly from the World Peace Conference by the soldiers of this empire and imprisoned in barracks, converted to prisons. On the rescue helicopter to fly into the territory of the enemy and take out 16 hostages on each level. Be sure tanks and airplanes will not leave you alone until you save everyone. By the way, planes are not as dangerous as ground enemies.
For the first time Choplifter appeared on the Apple II platform, thanks to the efforts of Dan Gorlin. Then it was ported to arcade machines, and then, it spread over almost all platforms from the beginning of the 80s to today!
For the Atari 7800 was created a wonderful version of Choplifter, colorful and modern. One bad thing is management. The helicopter does not listen as it was desired.
‹
›
Home
View web version