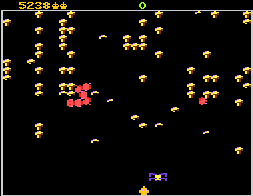 Genre: Action
Perspective: Side view
Visual: Fixed / Flip-screen
Gameplay: Arcade, Shooter
Published by: Atari Corporation
Developed by: Atari
Released: 1987
Platform: Atari 7800
On a beautiful mushroom swaths threatening clouds are approaching: more and more added centipedes, spiders, poisonous scorpions and even fleas! Help nature, take the Bug Blaster and show everyone where their place is!
Centipede was the first arcade game developed by female hands, the programmer Atari - Dona Bailey, not without the help of the arcade guru - Ed Logg.
Atari 7800: Centipede, probably the most exciting shooter ever created, and the version for 7800 absorbed all the best from the previous ones. This is the same great graphics, smooth animation, sound effects, as in the arcade original, plus the possibility of playing together simultaneously! Uletny gameplay is present. Like the Asteroids for the 7800, this game is a 100% replacement for the arcade original.
By the way, Centipede was made back in 1984, and released three years later!
‹
›
Home
View web version