Castlevania: Symphony of the Night (PS1) 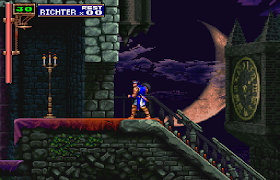 Genre: Action, Role-Playing (RPG)
Perspective: Side view
Visual: 2D scrolling
Gameplay: Metroidvania, Platform
Narrative: Europe, Fantasy
Narrative: Horror
Published by: Konami of America
Developed by: Konami Computer Entertainment Tokyo
Released: 1997
Platform: PlayStation (PSX, PS1)
Fashion is a famous anemone, but PlayStation with Castlevania again falls into the top ten - vampires are again in vogue. Of course, the Legacy Of Kain game is cool and has a lot of dedicated fans, but Castlevania ... Here's the superstar - himself Count Dracula - Prince of Darkness! And although according to legend he appears in the light of God once in 100 years, PlayStation did not miss this chance! In this game, you are a vampire hunter, trying to deal with them! And where - in their very den, the famous birthplace of Dracula Castlevania! The new game in this series on the PS has kept all the fun and exciting of its predecessors, and even more. 3D image, a huge capacity PlayStation, the ingenuity of developers, etc. So, closer to the point ...
When you start playing, the Final Level cut scene appears. This is just the continuation of Castlevania IV (on SNES) and your game, in essence, starts from the place where the game ends. And the first level of PS-version is the last level of the game on SNES, where you will meet with the final Boss.
You play the role of the immortal vampire fighter Richer Belmont (Richter Belmont, although it seemed to us that he was called Simon, but who knows this?) And climb up the steps to the castle tower of Count Dracula, to face the terrible vampire face to face. After a fierce battle, during which Dracula turns into a monster, you manage to finish this blood-sucking nightmare. End of history !? That's really no fun, PlayStation is just starting its game!
Dracula's castle is about to reappear on the surface and it is clear that the Belmont will not miss the opportunity and will accept the challenge. The problem is that the last Belmont mysteriously disappeared four years ago. And today the place of the legendary count will be occupied by his son - Alucard, and he will enter fight. And then the PlayStation version makes another unexpected turn in Castlevania - now you yourself will play a vampire! Not bad!
The game always took place in the castle of Dracula - and the latest version preserved and consolidated this tradition. But there are no separate stages here - you just have to explore a huge fortress. And in the course of the game, you can find a map of possible discoveries, and the size of the research that is coming to you is simply amazing. And you are free in your travels around the castle, and this is important, because there are just tons of secrets!
Yes, by the way, unlike Richard Belmont, who is armed with only a whip and special icons, Alucard is clearly more versatile "nature" and is armed with the widest arsenal. And as a specialist in children's bloodsucking - he is very sophisticated and inventive.
Since Alucarda has two arms, he can fight with a huge two-handed sword, and better with the Sword in one hand, and with a shield in the other (controlling the Circle and Square buttons). Some weapons have specific capabilities. So, the Stone sword is very good against the stone helmet. Cloaks are also an important detail and have different magical properties. Dress one - become partially invisible; wear a "bloody" cloak - you can suck blood from the wounds of enemies. All raincoats are different, and you still have to deal with their use.
A vampire can destroy not only the sunlight, just poke a spear in his heart, and it's done! But vampires are not fools - they wear vampiric armor! Well, there are different armored plates there. It is very convenient: both the lance strikes reflect and the count's suit does not spoil.
A suit is important, although the jewelry is also a serious problem. Of course, it's very good to wear different knick-knacks - they emphasize the high social status and power of the Prince of Darkness. And Alucard's rings are just a secret weapon (give agility and agility in attack and can increase strength). And then there are two special rings, without which you can not open a passage in the floor.
And finally - a hat. Anyone will make an intelligent, i.e. clever. A necklace - increases the attacking power. One is worn on the head, and the other is worn around the neck.
Well, in addition to everything else, the game is surprisingly many supernatural Power-Up, which are automatically included in your arsenal, as soon as you find them. There are double jumps, as well as numerous transformations into wolves, bats and even fog.
‹
›
Home
View web version