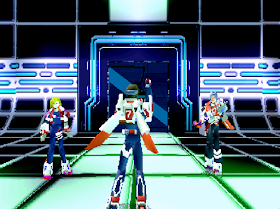 Genre: Action
Perspective: 3rd-person
Gameplay: Shooter
Published by: SEGA of America
Developed by: Sega AM8 R&D Division
Released: 1994
Platform: SEGA Saturn
According to the story, an elite group of fighters called "Burning Rangers" should save the Earth from the fall of the spacecraft.
The development of Burning Rangers began after the release of Nights into Dreams ..., in December 1996. The creators of the Sega talisman, Sonic the hedgehog, Naoto Oshima and Yuji Naka, participated in the creation of the project. The shooter is completely executed in 3D graphics, and for the first time on Saturn the effects of translucency were applied. In total, the game was developed about a year and a half.
After the release of Burning Rangers received from the press, basically high marks. Journalists praised the game for graphics, 3D-engine, control and a short duration of locations, but criticized the technical flaws, low level of complexity and design bosses. Unlike most other games of the Sonic Team, the shooter has not gained much popularity among players due to low sales of the console Saturn. And although the sequel was never released, in subsequent projects from Sega there were references to the events of Burning Rangers.
Burning Rangers is a third-person shooter, performed in 3D graphics. The game takes place in a futuristic society, in which fire represents the main danger. To cope with emergencies, an elite group of firefighters was created called "Burning Rangers". The main team, Chris Parton, Big Landman and Reed Phoenix, also known as Reed, was joined by two recruits - a fellow Shou Amabane, and the girl Tillis. From the Earth, it was reported that a spacecraft, covered with a layer of garbage, was approaching the planet. The main characters go to the station to prevent it from falling.
From the very beginning for the game, only two main characters are open - Shaw and Tillis, the rest must be unlocked using a special password. Despite this, all the characters have only one goal: to pass four levels ("Fallen Memory", "Silent Blue", "Gravity Zero" and "Winged Cradle"), along the way saving people and neutralizing fires with a special pistol. Information about nearby hazards is provided by Chris by radio. After extinguishing the fire, crystals appear (in the game they are called "Maztabaluxor Crystals"), necessary for transporting people to Earth. If a character takes damage from a fire or explosion, he loses all the crystals he receives, but he can reassemble them. The main characters can die after the full filling of the "dangerous limit" scale on the screen on the upper right; In the case of the character's death, the passage of the game begins from the very beginning, or from the checkpoint. At the end of each level, there is a battle with the boss, and, in case of victory, the score is calculated, the rank is awarded (the worst rank is "D", the best is "S") and the code for passing locations with other characters is displayed. After completing the game, the level generator opens, which is a compilation of different parts of the locations. In addition, in the Burning Rangers mode "Sound Test" is available, in which you can listen to music from the game.
‹
›
Home
View web version