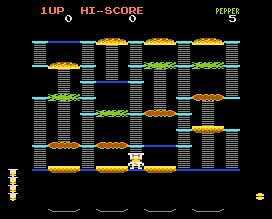 Genre: Action
Perspective: Side view
Visual: Fixed / Flip-screen
Gameplay: Arcade, Platform
Interface: Direct Control
Published by: AtariAge
Released: 2007
Platform: Atari 7800
Beef Drop - an excellent port of the classic arcade game Burgertime. Graphic and musical accompaniment at a high level, the gameplay is pleasant. VE version, released in 2007, differs from the previous lack of Pokey chip, responsible for improved sound. Fortunately, the game does not lose from this, the difference in principle is not felt. In addition to the standard levels of complexity, there are "Atkins", "Vegetarian", "Mirror" and "More". Going through the standard levels "More", you can get into new, not previously known.
You are a young overage cook, named Chef Pepper. The challenge is to make 4 giant hamburgers. You will be disturbed by everything, including chicken, fried eggs, hot dogs, etc. They can be crushed with constituent parts of a sandwich - under beef, salad and rolls.
Try it! A total of 7 levels, at the end of which you again find yourself on the first, but the complexity is already increasing.
‹
›
Home
View web version