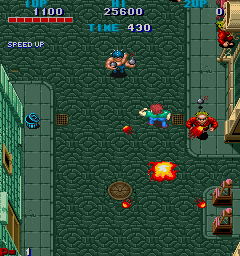 Genre: Action
Gameplay: Arcade, Fighting
Published by: Capcom Co.
Developed by: Capcom Co.
Released: 1987
Platform: Arcade Machine
It was designed by the duo Takashi Nishiyama and Finish Hiroshi who later developed the original Street Fighter, as well as some of the first fighting games for SNK. In 2006, it was later included on the compilation Capcom Classics Collection Vol. 2 for PlayStation 2 and Xbox and Capcom Classics Collection: Remixed for PlayStation Portable1,2.

The game takes place in Paradise City, where the villain, "Geshita", has captured 6 girls from the city. The player's objective (as Ryu or Ko) is to banish "Geshita" from Paradise City once and for all. During the game, the player can pick up powerups like the "Speed Up", the Super Punch, Grenades, Shurikens, Nunchaku and extra health. The game also features hidden areas on each level, accessed by breaking doors in structures on either side of the screen. The player's character has 3 normal means of attack: Punches, which are quick with short range, Kicks, which are slower with longer range, and the Roundhouse, which hits in a 360 degree motion.
‹
›
Home
View web version