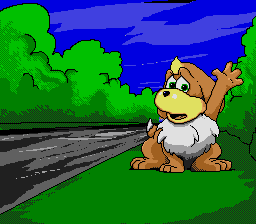 Genre: Action
Perspective: Side view
Visual: 2D scrolling
Gameplay: Platform
Published by: JVC Musical Industries
Developed by: Core Design
Released: 1992
Planform: SEGA CD / Mega-CD
Core Design is known for its solid platformers: Chuck Rock, a couple of Asterix series (1, 2) and later Bubba 'n' Stix. But there is one more hit in her Game Library - Wonder Dog for Sega CD. Than the Miracle-Dog reminds Bubsy, released later Accolade - 16-bit platformers quickly enough began to resemble one on another, after all the keystone of success of those years - a maximum of green color and the amusing key character. Wonder Dog is an action platformer in which the player is to hold the dog through all the trials to defeat the space terrorists known as Pete Bouli. Unlike other representatives of the genre, a banal jump on their heads from the enemies can not escape, they have to throw them with stars.
The planet K-9 was captured by the ferocious space armada of the Pit Bulls and now the fate of this once-peaceful planet is hanging by a thread. Fortunately, shortly before the ferocious Pitbulls got their secret Wonder Serum in their greedy paws, the scientist with K-9 Doctor Kibble control to stick it into his puppy, and more importantly, managed to send him to another planet, away from the evil bloodhounds. A spaceship with Miracle Dog on board made a hard landing, where he would have to mature, hone his combat skills before he returns home, to the helpless K-9. After the Earth, he will have a fascinating journey through a bizarre galaxy inhabited by strange inhabitants, Martian mutants, lousy mongrels, trash cats, and even long-nosed, fetid Zonkers.
The introductory cartoon tells us about the hard fate of the planet K-9, and then shows the hard landing of our dog. He finds a red-haired boy, and together they spend a lot of fun hours, but then his parents take him home, and the despondent dog dresses in a super suit and starts his hard way. It is waiting for 9 different zones - 20 levels with many hidden places, secrets and of course, bosses. Graphically everything is very bright, colorful, worthy - we have a modern high-quality platformer. The similarity with Chuck Rock, of course, is high, but what can you do, the developer is one. Introductory cartoon, of course, low quality, and the ending is clearly not completed, but the gameplay paid enough attention. How does our hero differ from other Miracle Dogs, invented at various times by American dreamers? First of all, his cartoon appearance. With the voice acting, too, everything is fine, good, CD disc holds a lot of information. And this is all despite the fact that before us is one of the first games for the Sega CD! The game itself is quite simple - it guarantees a pleasant passage. And more time is spent looking for secrets and admiring strange worlds.
Wonder Dog was so cool on the Sega CD (before the Sonic CD of course), like Super Mario Bros. on NES and Sonic on the other SEGA. It's no wonder that it became the mascot of the WonderMega and JVC X'Eye hybrid consoles. This is one of 22 games released in cardboard boxes.
In Europe, the release date is April 23, 1993.
The version for Amiga, of course, is worse - this is the first game, ported from Sega-CD to Amiga. But it is sharpened under the iron A500; less colors, there is no introductory video, the game screen looks cropped and the level graphics (background, status bar) are slightly altered, the music is also severely limited. On average, the game is rated at 75% (the original is 90%).

Dogsville - MYSTIC
Loony Moon - LEDZEP
Planet K-9 - WOOPIE
Planet Wierd - REEVES
Plant Foggia - PIXIES
Scrapyard - ANKLES
Level/Zone Skip - Select Password from the Main Menu using the Start Button. Type LUCIAA and then highlight Try It and press Start. While playing, pause the game and press the A button to skip to the next area, or when applicable press B to skip to the next zone.
‹
›
Home
View web version