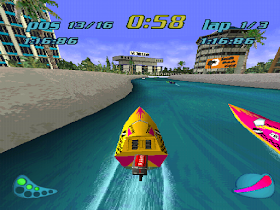 Genre: Racing / Driving
Perspective: Behind view
Gameplay: Arcade
Vehicular: Naval / Watercraft, Track Racing
Published by: Sony Computer Entertainment America
Developed by: Team SOHO
Released: 1998
Platform: PlayStation (PSX, PS1)
This game, combining beautiful graphics, beautiful water landscapes, super fast boats, two-player mode with a split screen, 18 tracks in six regions and a bunch of various dangers and obstacles, seems to be the best water-racing simulation, the sensation from which can compare only with this race! Rapid Racer makes us take a new look at both the technical capabilities of PlayStation, and the very team of developers that creates it. This command is not the first time increasing the bar of the quality of the graphic performance of games on the PlayStation. It's no exaggeration to say that all of their previous work was one of the most attractive in their genres, whether it's a Porsche Challenge racing simulator or a series of Total NBA games (NBA ShootOut). But if in their previous works behind the pleasant graphics was not so much a worked-out gameplay, Rapid Racer also destroys this stereotype.
Races, unlike other genres of video games, are very demanding both for the work of programmers, and for the capabilities of the system itself. And it is this genre that is most often used to demonstrate the technical capabilities of any modern apparatus. As for races on the water, then there really is a titanic task for programmers - it is plausible to transfer the physics of the movement of the swimming device, the movement of the water itself, and also their interaction with each other. And all this computer / game console has to be calculated in real time. Thus, until the last moment it was believed that such games are technically possible only on powerful Arcade machines, but not on a 32-bit gaming system. In 1996, there were first examples of such games, when almost simultaneously SEGA, Namco and Konami released their own version of races on water motorcycles, and Nintendo hit the entire game world with the WaveRace 64 race for its powerful 64-bit platform. But to achieve at least something similar to a 32-bit system, then it was impossible to dream. However, SONY thought differently.
After a year of hard research, programmers found a way to squeeze out of PlayStation almost all the maximum that it is capable of. Only for the study of the physics of the motion of the boat took more than seven months of painstaking work. But it was worth it, and now you can safely say that for technical perfection on the home game console PlayStation this product has no equal. The game is played at high resolution at a speed of 60 frames per second (50 frames in PAL version). For all that, its creators did not sacrifice it to the lack of textures or detailed landscapes, as it was done, for example, in a 3D fight from SquareSoft, Tobal No.1. And although unlike its prototypes on Arcade machines and a 64-bit console, the water in the game is opaque, its motion is transmitted incomparably. That is, it flows as it should flow in life. And the management of the boat itself, although it seems at first rather complicated, corresponds to the real laws of physics, while still giving the players a simple pleasure. But the developers do not end there. For the first time in the race each track is generated using fractals. This allowed the developers to include in the game along with six pre-created yet 256 different randomly generated levels. After passing the main game, you will also be given the opportunity to set up the main parameters of the "fractal generator" and create your own tracks. So the main problem of all races, namely a small set and a variety of tracks, in Rapid Racer, it seems, is solved.
Do not forget about the well thought out multiplayer mode. In Rapid Racer can play simultaneously either 2 players, or up to five people in turn. In this case, you have the option to select either a horizontal or vertical division of the screen in half. In general, the developers of the game tried as long as possible to keep us behind their game at the TV screens.
But on one only technical superiority and quality of graphics in the history of video games you will not enter. Today this game is a hit, and within a year all these today's bells and whistles will seem like a children's game, and all that remains of the former appeal is memories alone. And we must always remember that much more important than polygons, textures and fractals is the very basis of the game, that is, this notorious gameplay. Fortunately, the gaming features demonstrated in Rapid Racer already today make it one of the best quality races of our time for the PlayStation.
Those same players who do not close in one format, preferring to enjoy all the delights offered by the game industry, may have a question: why did SONY spend so much time and money on repeating what had already been demonstrated by its competitors, and not engaged in the development of something really new? And this factor is the only object for criticism in this game. But, by and large, Rapid Racer was conceived as a demonstration that you can not buy all game consoles and computers to get a game of any genre in your collection. All that SONY wanted to say with its game is that even if Nintendo or SEGA releases something revolutionary, then the PlayStation will soon have a game if not better, then at least of the same level. But with this task Rapid Racer coped, and very well.