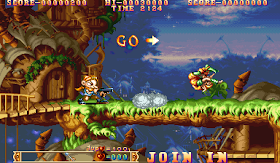 Genre: Action, Compilation
Perspective: Bird's-eye view, Side view
Gameplay: Arcade, Platform, Puzzle-solving, Shooter
Interface: Direct Control
Published by: Capcom
Developed by: Capcom
Released: 1991
Platform: Arcade Machine
As the name implies: "3 miracles", the game gives you the choice of 3 genres: action, shooting and puzzle. In the first genre you are given the opportunity to feel yourself in the role of a special command troll, who shoots to the right and left all evil spirits, including evil trolls. Everything that happens is something similar to Gun Star Heroes and Ghouls'n Ghosts. In the second mode, you fly and shoot, everything is like in the classic game of this genre. In the third - you play the role of a hare, which is engaged in the movement of blocks, by which it also destroys its enemies who are caught in the way; with each level of play is becoming more interesting, and the enemies as a consequence more. The graphics in the game are pretty bright and beautiful, you can not even say that on CPS1.
‹
›
Home
View web version