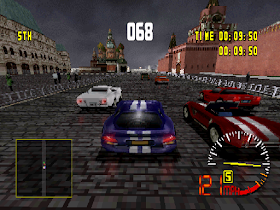 Genre: Action, Racing / Driving
Perspective: 1st-person, 3rd-person, Behind view
Gameplay: Vehicle Simulator
Vehicular: Automobile, Street Racing
Published by: Accolade
Developed by: Pitbull Syndicate Limited
Released: 1998
Platform: PlayStation (PSX, PS1)
The fifth game from the long racing series Test Drive can still entertain you with a fast ride on the chic sports cars on the routes from all corners of the world, including even the arrival on the streets of Moscow! On the roads, in addition to other drivers, dense city traffic and the ubiquitous police will play against you, further complicating the already difficult struggle for leadership. However, in general, a good disadvantage is spoiled by a serious flaw: computer machines can not be trimmed, moved, or otherwise affected by the trajectory of their movement.

Do not brake at the first turn on the road in Moscow. Keep to the inside of the track, you ram a lot of cars, drive them into the walls and be able to break into the leading positions
Passing the turns-studs on the course Courmayer Circuit, use a manual brake to technically go through the slip.
If the policeman catches up with you and you can not get away from him, then as surrender is inevitable, it's better to slow down quickly yourself - you will lose less time
At the forks, go to the deserted areas (ie, not crowded with transport), there you can develop a good speed and jump out to the leading position. The computer most often drives its car to the left track
Arrange accidents for policemen and rivals. Well accelerate and when you approach the slow moving car, jump sharply aside. Persecutors may not be in time for your maneuver and crash into a completely unsuspecting "teapot"!