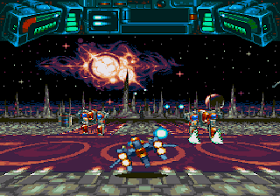 Genre: Action
Perspective: Behind view
Gameplay: Shooter
Setting: Sci-Fi / Futuristic
Published by: Core Design
Developed by: Core Design
Released: 1994
Platform: SEGA CD / Mega-CD
The game Soulstar is one of the best representatives of the genre Shoot'Em Up for Sega Mega-CD. The game is done in 3D with the use of sprites, it all looks amazing. For example, you can say that the game is similar to Silpheed for Sega CD and Star Fox for SNES, in addition to all this, it will also have levels in the gameplay similar to the levels from the game Space Harrier for SMD. And also full-fledged 3D levels with full freedom of action on all axes. You will fly on the Treaghon spaceship as a pilot of Bryk Hammelt. In some levels, you have to play a mechanical robot Mech (Strike Walker). Similar to the robot from the game Front Mission.
At a distance of thousands of light years from Earth in a distant galaxy, in the Soul star system, six young planets orbited peacefully around their sun, unaware of what would happen soon. And in their world will pass the horror, called as Myrkoids known as well as the "killer of the worlds" (devourer of the planets). He is much older than the stars themselves. Myrkoids appears in the star system, after which it starts sucking energy from the depths of each planet until it becomes empty and dead. Leaving it drifting in space.
You play as a member of the group Cryo-commandos, you have long been hunting for Myrkoids and are following their trail with supersonic speed through the Viridum Plus portals. But Myrkoids has always managed to slip away from you, but now you will meet him face to face, fighting for the fate of a new star.
In the game, you can also play together, but not two spaceships. One player will still completely control the ship, but the second player will control the gun. By the principle, as it happens in the Battletech game.
We were going to do the same version of the game Soulstar for Sega 32x and Atari Jaguar CD. Game Soulstar X for Sega 32x beyond the prototype did not go away.
‹
›
Home
View web version