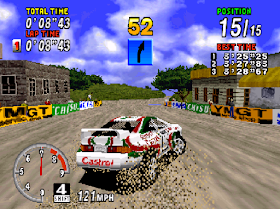 Genre: Racing / Driving
Perspective: 1st-person, Behind view
Gameplay: Vehicle Simulator
Vehicular: Automobile, Track Racing, Off-roading
Published by: SEGA Enterprises Ltd
Developed by: Sega AM3 R&D Division
Released: 1995
Platform: SEGA Saturn
Sega Rally Championship comes from arcade machines, which makes it endowed with several characteristics: fascination from the first second, simple control and, oddly enough, short duration. There are only 2 cars in the game: Toyota Celica and Lancia Delta, but there is a possibility to configure them.
You can subject to calibration: steering sensitivity, front suspension stiffness, rear suspension stiffness, turbine overpressure relief valve, and tire friction coefficient.
The game consists of one series, which is divided into 4 stages, among which 3 main and additional, to which only the rally masters who came first at the end of the third stage are allowed.
Initially, you start the 15th, with each step, systematically trying to pull yourself higher. So, following the route, you will hear the navigator's tips, occasionally glancing casually at the grazing zebras, flocks of birds in the sky or swans swimming on the lake. But it's hard to do when adrenaline rushes over you, because you need to pay attention to the studs, chicanes and warnings of jumping at speeds of about 200 km / h.
Stages of the rally pass through the channel of the shallow river, mountain serpentines and city quarters with a crowd of onlookers. But the main thing in all this is to marvel at your driving style, looking at the end of the repetition and savoring how the dirt flies out from under the wheels of the car.
In general, the game leaves after itself a great impression, it can be recommended as a "game for 20 minutes", which will be useful after a hard working day. And while she still does not get tired for a long time.
‹
›
Home
View web version