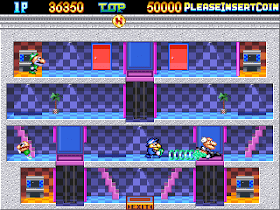 Genre: Action
Perspective: Side view
Visual: Fixed
Gameplay: Platform
Developed by: Toaplan
Released: 1991
Planform: Arcade Machine
I've been to some strange alternate worlds during all my years of videogaming, but today's might be the most bizarre parallel universe of them all: a world where you have to destroy computers to see pictures of naked women! Madness, utter madness. It's Toaplan's 1991 arcade bombs-n-boobs-em-up Pipi and Bibis, also known as Whoopee!
‹
›
Home
View web version