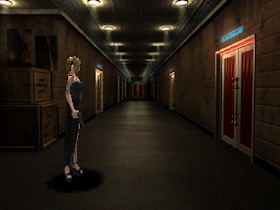 Genre: Role-Playing (RPG)
Perspective: 3rd-person
Narrative: Detective / Mystery
Pacing: Real-Time
Published by: Square Electronic Arts
Developed by: Square
Released: 1998
Platform: PlayStation (PSX, PS1)
The plot of the game is based in part on the fantastic novel of the horrors of Hideaki Sena "Parasite Eve". The game is the first in the game of the same name.

It's almost a completely traditional Japanese role-playing game, but unlike the Final Fantasy series and the likes of it, there is a significant addition during the fight - Aya can move around the field without spending any points. This small addition turns the fight beyond recognition, because it combines traditional battle tactics from the Japanese role-playing game and brings in it action elements from other genres, forcing the player to study and evaluate the opponent's actions on the other hand (his mobility, speed) - this greatly increases the variety Possible tactics of fighting with different monsters.

After the game is over, the player will be asked to save. You can start the game in a new mode. He repeats the usual game, but on the second day there will be a new location - the Chrysler Building. It is a 77-story building, a labyrinth inhabited by monsters, and will meet like monsters from the usual game, but stronger, and newer. Also on some floors there will be bosses.

Aya Brea, a New York City police trainee, attends an opera at Carnegie Hall. During the opera, all the people in the building fire spontaneously - except for Aya and the opera singer Melissa Pierce. Melissa called herself "Eve" and disappeared. In pursuit of her through the Carnegie Hall building, Aya collides with a strange girl who reminded her of Maya, her dead sister, as well as monsters - animals, who turned into strange and aggressive creatures. Soon she finds Eve and sees how she turns into a monster and flies into the sewer. After wandering along the sewer she again meets that girl from the theater. In pursuit of her, she finds Eve, who tells her about the release of mitochondria. Eve, leaving, leaves Aya to fight with the monster - Alligator. The next day, Aya and her partner, police officer Daniel, visit the American Museum of Natural History and turn to the scientist Dr. Klump, who tells them about the evolution of the mitochondria, explaining the possible essence of what is happening. Under normal conditions, mitochondria are simply organelles of cells that provide them with energy. In the case of Eve, the mitochondria reached a new level of development, having learned to store genetic information on their own, and can do without cells at all, while possessing enormous energy production capabilities. In the person of Eve, they declared war on all cellular life on Earth, including humanity. Aya is for some reason unresponsive to the abilities of mitochondria and even reveals new supernatural abilities.

Aya Brea - from an early age she dreamed of working in the police. She succeeded. Completely by chance, being in the right place at the right time, she turned out to be the one who can withstand the terrible power of mitochondria. But why Eva is powerless before her, and what is hidden in her past - this is what the player needs to know in the course of revealing the plot of the game.
Maya Brea - Sister Aya. Aya almost does not remember anything about her childhood, otherwise she would recognize in the face of this girl a sister who died many years ago in a car accident. Why Maya began to visit her sister, what she needs and where she beckons her - all the answers at the end of the game.
Melissa Pearce - opera singer, at the cost of her health achieved success and received a major role in the famous performance. But her first aria turns into a requiem for hundreds of people, self-burned during the performance. It was in her body that Eve hid, gathered strength and waited her time.
Danniel Bo Dollis is an experienced partner of Aya, who infinitely loves his son and is devoted to his duty and vocation.
Ben Dollis - son of Daniel, during the game gets into different scrapes, but our heroes save him. Always behaves well done.
Kunihiko Maeda is a talented microbiologist who worked in Japan to study mitochondria. Realizing that the incident at Carnegie Hall was associated with them, he immediately flew to New York to help Aye in this difficult matter.
Hans Clamp - is an ingenious scientist of world renown who has devoted himself entirely to science and is ready to sacrifice it for thousands of lives. Why did his wife and son Daniel appear on his lists of subjects?
Wayne Garcia & Torres Owens - the first - a young gunsmith, working in the police station and pleasing Aya with his ability to create from different trash powerful cannons. The second is Wayne's supervisor and mentor, an experienced policeman who lost his daughter in the aftermath of an accident involving a firearm. After this unfortunate event, he became an arms master to always keep under control the safety of weapons.
Douglas Baker - the head of the seventeenth New York police station, which employs Daniel and Aya. Years of sedentary paper work may have influenced his appearance and body weight, but not on courage and courage. The boss heroically behaves in the police station, when Ben's life looms over the life of the baby.

After the release of the game, two soundtracks were released to her: the original and a remix. Music for the game was written by Yoko Shimomura. The track "Somnia Memorias" was presented at the Square Vocal Collection in 2001.