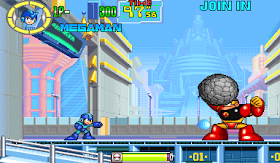 Genre: Action
Perspective: Side view
Visual: 2D scrolling
Gameplay: Arcade, Fighting, Shooter
Published by: Capcom
Developed by: Capcom
Released: 1995
Platform: Arcade Machine
It is part of the Mega Man series and is notably a spin-off of Mega Man released on NES in 1987. The game was adapted on console GameCube, PlayStation 2, Xbox in 2004 and 2005.

Once again, Professor Wily is doing his own and it's up to Mega Man, Protoman and even Bass to stop the mad scientist.

The graphics engine used is visually similar to that of Mega Man 7 on Super Nintendo. As a result, Capcom has just taken the sprites of the moguls of Mega Man 7 and adapted them for the duels. In contrast, the robots from the NES games were treated to a new 16-bit appearance.
Each character has its own end.

Unlike the more conventional episodes of the series, Mega Man: The Power Battle focuses exclusively on the duels against Wily's robots. The result is a hybrid game, halfway between the beat'em all and the traditional Mega Man.
Faced with multiple opponents proposed, all from the classic series, the player has access to three characters: Mega Man, Protoman and Bass. As in any good Mega Man, the player can recover the weapons of the defeated robots and use them to facilitate his progress.
Like most arcade games, Mega Man: The Power Battle can be played by two.

Whichever series you choose, the game ends with a two-part fight with Professor Wily's machine. Once the machine is destroyed, the mad scientist will try to escape in a flying saucer and the player will have only a limited time to prevent it.
‹
›
Home
View web version