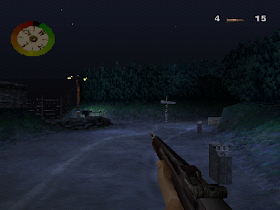 The game takes place between June 6, 1944 and May 4, 1945. The protagonist of the game pilot of the military transport corps James Stephen Patterson did not complete one course at the academy and was drafted to the front. On the night of June 6, 1944, the Allied Command conducted one of the most ambitious air operations for landing in Normandy in the history of the war. However, the operation itself was tragic, a large number of aircraft were shot down, many crews were off course due to poor visibility and fierce German fire and landed troops completely out of place. Lieutenant Jimmy Patterson was on target, but his plane was shot down. He bravely defended his wounded comrades from German patrols, destroyed a large number of enemies and was rescued by the incoming American paratroopers. For his feat, Jimmy Patterson received from the US Congress Medal of Honor, the highest military award of the United States. Now he is offered to join the Office of Strategic Services (OSS). If he agrees, then he will fly to France, if not - then he keeps silent about what was in this room. On meditation he is given an hour - this is how long the plane will wait for him. What happened next is unknown, but the fact that the first mission begins with a parachute jump means that he agreed.

Health is indicated by a green circle around the compass, which indicates your direction, as well as the side from which they shoot. If the protagonist starts getting injured, the circle will gradually turn red and turn into an arc. Health is supplemented by first-aid kits of various values ​​or jars of water, sometimes falling out of enemies.

The soldier's arsenal consists of M1 Garand and BAR rifles, Thompson submachine guns and MP 38, Walther P38 pistols and a pistol with a silencer, grenades, Panzershrek and Bazooka grenade launchers. In some missions, MG-42 stationary machine guns come across - their radius of fire is limited, but the ammunition is endless and they do not need recharging. When the enemy stands behind the machine gun, the situation becomes very dangerous - it is difficult to kill a grenade, because they either do not reach because of a strong fire, or they bounce off (all machine guns are behind barbed wire fences, sandbags or are in concrete pillboxes).

The game consists of 22 levels for 7 missions. The co-ordinator Manon Batiste explains the purpose, objectives and location of each assignment. In missions where it is necessary to be disguised as a German officer, if you are discovered, one of the opponents will run to the alert button, the other one will cover it at that time. Also, when you walk in the officer's uniform on the deck of the ship, the sailors will let you in if you show them your false documents. Officers will suspect you if you show your face too long.
A mandatory condition for the successful passage of a mission is the complete fulfillment of all tasks at the level. If even one task is not fulfilled, then the mission is failed and it will have to be repeated.

The artificial intellect of the enemy does not have realistic habits, but due to some possibilities they are able to give worthy resistance:
enemies can hide behind corners or fences and look out for shots;
The ability to defend themselves against grenades - the Germans sometimes beat the thrown grenades with their feet or lift them and throw them back into the player, they can even rush onto it with their bodies and save their comrades;
Use of interactive elements of the environment (including machine guns);
Enemies can pretend to be unarmed, some scientists can surrender and at the most unexpected moment open fire from a gun hidden in a medical gown or even a machine gun;

After the complete passage of the game, the video or frames of the created missions are opened, as well as various game art.