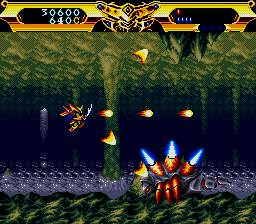 Genre: Action
Perspective: Side view
Gameplay: Shooter
Art: Anime / Manga
Setting: Fantasy
Published by: SEGA of America
Developed by: Hudson Soft Company
Released: 1993
Platform: SEGA CD / Mega-CD
Once upon a time, the peace of Mistral was returned to the brave warrior Drak - he sealed the evil god named Deoric under six continents. However, as you well know, nothing lasts forever under the Moon. The evil empire of Garuda invaded the territory of Mistral and six generals conquered those continents. The head of all generals, Sornbul, wants to free Deoric and plunge the Earth into chaos. Duran is a descendant of the glorious hero of Drak. And guess who will have to save the world?
Excellent shooting, incendiary cheerful music style Heavy Metal. They say that this is an unofficial continuation of the glorious deeds of Gate of Thunder - also an excellent game for PCE CD. Only seven levels, so consider it your duty to pass them as quickly as possible, because the game is colorful!
‹
›
Home
View web version