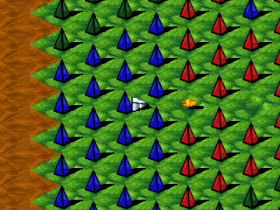 Genre: Action
Perspective: Top-down
Gameplay: Puzzle-solving, Shooter
Interface: Direct Control
Published by: Panasonic Software Company
Developed by: Magnet Interactive Studios
Released: 1995
Platform: 3DO Interactive Multiplayer
Funny arcade game Icebreaker for the game system 3DO Interactive Multiplayer combining several genres of strategy, puzzle, akshen and logic game. You play as a white movable pyramid lying on your side, whose goal is to destroy all the pyramids on the screen. But everything just sounds so simple, in fact there are a lot of pyramids of different colors with different properties. Some are destroyed by shots, others need to crash, and one more kind can be destroyed only with the help of moving seekers that pose a threat to us. To diversify the levels in many of them there are different pitfalls: pits, lava, marshland, etc. You also can not crash into the red pyramids. The game has only 150 different levels, which are not boring during the whole game.
The game has a very interesting name, which in Russian can be translated as "Icebreaker" but on the other hand it itself to the ice has nothing to do. You might think that the game originally planned to stab ice pyramids. But this is not so, everything is much simpler. The game is so simple, fun and exciting as Tetris, that it will be interesting in it to play both professional gamers and people who first sat down at a game console and took in the hands of a gamepad. That is, the game split stereotypes.
‹
›
Home
View web version