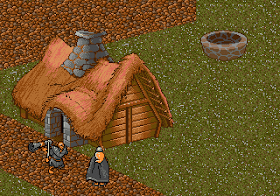 Genre: Role-Playing (RPG)
Perspective: 3rd-person
Visual: Isometric
Setting: Fantasy
Published by: JVC Musical Industries
Developed by: The 8th Day
Released: 1994
Platform: SEGA CD (Mega-CD)
Heimdall is an excellent RPG for Sega Mega-CD, it should please even those who do not greatly respect this genre. For some reason, this game reminds me of the game The Adventures of Hercules for PSX, the same fun and funny cartoon graphics. Only the actions of the game take place not in ancient Greece, but in the world of Vikings and Scandinavian mythology. Loki steals a spear, sword and hammer from the gods Odin, Freyd and Thor. This makes them helpless (but not mortal). They decided to conceive in a divine way a child on Earth. That in the future, when he grows up, he would return to them their three legendary weapons. The child was named after the gods as Heimdall.
At the very beginning of the game, you can choose five characters that will help you. Good choice is great, you can take a warrior, druid, magician, magician, berserker, ship repairman, navigator. Yes, anyone. Then you on your ship will travel to different islands, solving there various puzzles and puzzles collecting the information you need and items. Only three cards Utgard, Midgard and Asgard on 15 islands on each. What is important, the game is full of funny humor.
This is exactly the RPG, which is worth playing on the Sega CD. Also this game came out on other gaming consoles and systems, such as Amiga, MS-DOS, Atari ST, Acorn Archimedes. There was also a sequel called Heimdall 2. Heimdall is an adventure game developed by The Eighth Day and published by Core Design.
‹
›
Home
View web version