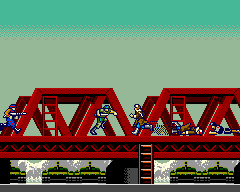 Genre: Action
Perspective: Side view
Visual: 2D scrolling
Gameplay: Arcade, Platform
Narrative: War
Published by: Nintendo of America
Developed by: Konami Industry
Released: 1985
Planform: Arcade Machine
Rush'n Attack is set in the middle of the Cold War ( while the European title means green cap, the American title, translatable as "shoot and attack", is a word game in that it is pronounced as "russian attack", ie "Russian attack"). In 1989 a sequel entitled M.I.A .: Missing in Action was published.

The player takes the role of a US soldier of special bodies infiltrated into an enemy military base, with the aim of saving numerous prisoners of war, before they are executed. The videogame consists of four levels: the Missile Base sorting area, the port, the air base The bridge and the Siberian field. Initially the player has to defend himself exclusively with a knife, but during the levels he can collect other more effective additional weapons. By killing some enemy soldiers you can even get flamethrowers, bazookas or hand grenades.
Each level concludes with a demanding test: in the first one it will be necessary to eliminate all the soldiers that come down from a truck, in the second there is to fight against a large number of ferocious dogs and their trainers, in the third one has to do with three autogiro , while in the fourth the player will face three very skillful flamethrowers (one at a time). The player should move in the game exploring a new territory walking from left to right, but if he stays still in the same spot, without advancing with the screen, for about five minutes, a Sukhoi Su-7 will bombard the territory trying to eliminate all the soldiers enemies still alive. If you can avoid the bombardment, after a while you will have a Hurry Up and a siren will start: if within one minute the player does not reach the end of the level you will have the Time over and the loss of a life.
‹
›
Home
View web version