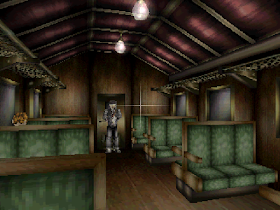 Genre: Adventure
Perspective: 1st-person
Gameplay: Puzzle-solving, Survival Horror
Published by: Agetec
Developed by: FromSoftware
Released: 1998
Platform: PlayStation (PSX, PS1)
Long ago on Earth there were two stones - blue and red. Red stone was a gift of the devil to mankind. The owner of the red stone could change his destiny with the help of human sacrifices. Sacrifices were made with the help of a knife with a curved blade, in the handle of which was a red stone. The drawback of the red stone was that the person who owned it gradually turned into a demon, and eventually died. About the blue stone is only known that it can in no case be combined with red. The history of the red stone is associated with the Rockwell family. Long ago, Allan Rockwell took possession of the stone, killing the king, who mysteriously gained power over the country. After that, the stone became the property of the Rockwell family, but it did not lead to anything good. After the stone took over William Rockwell, the Rockwell dynasty came to an end. Also shortly before the events described in the game, there was another important event. In 1913, the Orpheus passenger liner mysteriously disappeared into the sea along with all its passengers. The expedition sent for his search returned with nothing. The game begins in 1937 with the fact that Richard Osmond, who lives in the city of Anchor, receives a letter from his father Henry. This was the first letter from my father since Richard left his father's house. In the envelope was only a small key. A sudden phone call from the police department notifies Richard of the fire in his father's house. After that, Richard goes to the scene of the fire. It is here that it passes completely under your control.

Echo Night is an interactive adventure. The whole plot of this game is twisted around the ghost ship Orpheus, which carries a lot of mysteries. The game is made in the tradition of the genre of adventure, that is, you have to climb every nook to find some missing item. The most remarkable thing about this game is that you can easily be injured, however, do not think that this is a fighting game. Simply, long decision-making can be deplorable for you. On the ship Orpheus not all ghosts are friendly to you, and this manifests itself in their hostile behavior at the sight of your hero. One of the main tasks in this game is the search for a father who disappeared without a trace, leaving only the burnt house. Playing Echo Night is very good in the dark, as the game takes on a special atmosphere. The game is very cool.
If you are looking for an adventure game with a greater interactivity than usual, then Echo Night is exactly what you need. The game uses 3D technique, but at the same time retains the traditional sense of adventure, meaning that you have to scour the entire room from top to bottom in search of objects and keys (or, of course, to cope with this manual). The most remarkable feature of the gameplay is that you can get injured and experience damage. This is not a fighting game, but acting too slowly, or incorrectly, you can damage your character. Echo Night is one of those games that are best played in the dark. This not only enhances the mood, but also allows you to find objects with little expense.

After you finish the game, you are given a rating based on how much time you spent, what ending you came to, and what secrets you found.
In this game, the selection of Receipts and Healing Dents is considered as finding secrets. Spend time on this.
There is a lot of time for the game. You do not have to run everything. However, do not sit too long enjoying the situation. The element that requires the most time is a casino.
Winning the best rating does not really give you anything, so all your work spent on getting it will not be refunded.

Echo Night has three different endings. Make sure that you keep the game close to the end, so you can try to get them all.
Normal ending: Do not give any shower to an old blind person.
Bad ending: In the engine room, the old man will sell you a knife with a red stone inserted in exchange for 26 souls (Astral Flinders). We will say directly that such an outcome is not worth a lot of reward.
True ending: After you give the old man 26 souls refuse to take the knife. This will lead you to the best ending.

On board Orpheus there are many ghosts and not all of them are peaceful. Many aggressive ghosts will attack you and at the same time try to master them. If they take possession of you, then everything will fade and you will move much more slowly. The Holy Water will drive the demon out of you, but you must change to receive it.
On average, you can receive damage three to four times before dying. Do not waste Healing, since later it will become absolutely irreplaceable. Always try to find a Healing Remedy.
The last but decisive means - ghosts do not like light. The inclusion of light has an effect on devil's beings. When it burns, they do not appear. Ghosts in the flesh are harmless and can be useful.

The forces of the Blue Stone can "seal" the devil in a demonic Red Stone. In order for both stones to connect, they must both be illuminated.

You will need to find a way in the unlit passages of the ship. Follow these plans and you will have the opportunity to get where you want:
Legend:
‹
›
Home
View web version