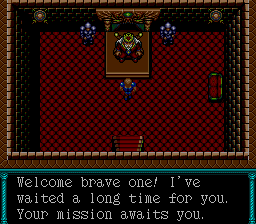 Genre: Action, Role-Playing (RPG)
Perspective: Top-down
Setting: Fantasy
Published by: NEC Home Electronics
Developed by: Atlus
Released: 1989
Platform: TurboGrafx / PC Engine
Dungeon Explorer is an action RPG developed by Atlus and published by Hudson Soft, originally for PC Engine, in 1989.
The plot revolves around the adventure of several heroes to find the Stone Pray for the ancient king of Oddesia. With the invasion by the alien race that now rules, the stone was hidden by the king in the depths of the kingdom's dungeons to keep it safe. Now, however, the king needs the players to recover the stone, which can bring life, light and happiness, and to end up with the alien king, Natas: King Satan. The heroes advance through different dungeons and fight against fearsome bosses, like Bullbeast or Grimrose, to recover the stone.
‹
›
Home
View web version