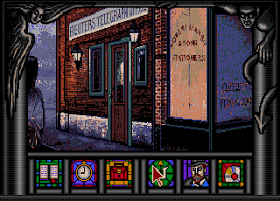 Before swap CD, save state to file, next CD, upload save state file, press button in game to resume.
Genre: Adventure
Art: Full Motion Video (FMV)
Narrative: Detective / Mystery, Horror
Published by: SEGA of America
Developed by: ICOM Simulations
Released: 1993
Platform: SEGA CD / Mega-CD
Game Dracula Unleashed from ICOM Simulations for Sega Mega CD represents the genre of FMV Adventure, it's a kind of horror film, dedicated to vampires. You have to solve many puzzles, collecting various items and having time in various places at the right time. Since the game is about vampires, there will be a change of day and night in the game. You have to play for Alexander Morris he is a young businessman from Texas. In the winter of 1899, he arrived in London to investigate the mysterious death of his brother Quincey, who died 10 years ago. He meets a charming girl, Anisette Bowen, on which he is soon going to marry. A good friend of his brother Lord Arthur Holmwood, invites Alexander to the closed mystical club Hades.
Soon Alexander Morris understands that he did not know his brother well and part of his life was a mystery to him. It turns out that Quincey Morris was in a group that destroyed the legendary vampire Count Dracula.
But Dracula is back, now he wants to make your bride out of your girlfriend, hurry.
Similar games Night Trap, Sewer Shark and Sherlock Holmes: Consulting Detective.
‹
›
Home
View web version