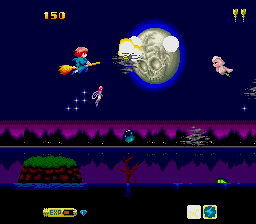 Genre: Action
Perspective: Side view
Art: Anime / Manga
Gameplay: Arcade, Shooter
Published by: Hudson Soft Company
Developed by: Success Corp
Released: 1993
Platform: TurboGrafx-CD (PC Engine)
Once upon a time the Evil Fog descended on this world, and, confronted with some prisms, began to absorb light. People began to be afraid, did not know what to do, lived every day, counting each last. Did not know how to return the light .. But there was one witch, who of course all this darkness was on the drum, and her only dream was a candy from a magical countries. Then a fairy named Silk persuaded her to help people for this candy. So, your task is to return all the prisms of Light to the fairies.
It certainly does not play at the speed of Thunder Force, but somewhere on the level with Air Zonk. The music is pretty good, sometimes even excellent. Graphics on a level, but not the best of course. Only 7 levels. At the end of each you are waiting for bosses, which will have to shoot fairly. Between levels there are jumping animated clips. In general, an excellent shooter, I advise you to try.
This is the port from the arcade version (and with the first port, then will go to other consoles).
Level select: highlight the "Exit" selection at the options menu. Then, press Down, II, II, Left, I, Right, Select. A sound and red background letters will confirm correct code entry. A level select option that allows any location up to level 4 to be played with twice the standard number of continues will be available.
‹
›
Home
View web version