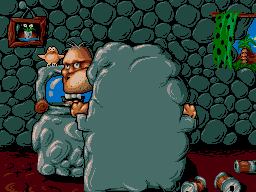 Genre: Action
Perspective: Side view
Gameplay: Platform
Visual: 2D scrolling
Published by: Sony Electronic Publishing
Developed by: Core Design
Released: 1992
Platforms: SEGA CD / Mega-CD, SEGA Genesis / Mega Drive
Game Chuck Rock is a well-known platformer, the version of the game for Sega Mega CD is one of the best. Unlike the version of the game Chuck Rock for Sega MegaDrive / Genesis it has funny animated cutscenes that tell us about the plot of the game. While Chuck Rock was watching television, his wife Ophelia Rock was hanging clothes on the street, and did so in a way that she was abducted by Garry Gritter, clearly for what purpose. Now, Chuck Roku has to do no small way to free her. You have to go through a dangerous path through a prehistoric world, similar to the world of the Flintstones. Your weapon is your stomach and kick. Similarly, Chook is able to lift and throw heavy objects in the form of stones. And so on for five levels.
It was also the second part of the game Chuck Rock II: Son of Chuck, but I already need to play for Chuck's son.