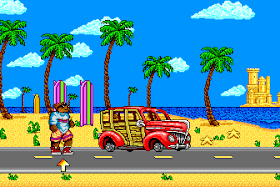 Genre: Action
Perspective: Side view, Top-down
Visual: 2D scrolling
Gameplay: Platform
Published by: Turbo Technologies
Developed by: ICOM Simulations
Released: 1993
Platform: TurboGrafx-CD (PC Engine)
Who said that Turbografx CD (I'm talking about American games) does not have bright hits? Yes, look at Camp California!
You were well rested in California, but some attacked byaka spoiled the whole rest! Now we must at all costs save our friends. Only on foot it's done - it's not serious, especially since there is a car in the presence. True, it was ripped, but nothing, at each stage you can find what-thread for it (basically of course it's fuel - all kinds of jars, bananas, cans, etc.). Here, and ride from stage to stage on a personal red car, saving friends, for which you can then by the way play at some stages.
Incidentally, the game carries a high note instructive character - you do go to different stages and collect garbage, which then recycle and get fuel! Ponchayusche. Nothing to pollute nature!
The graphics are good, the music is just heard. But the management is a little lame, after 10 minutes you get used to it. And nothing and no one will stop you! Everyone to play!
‹
›
Home
View web version