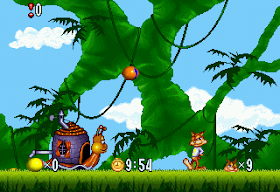 Genre: Action
Perspective: 3rd-person, Side view
Gameplay: Platform
Published by: Atari Corporation
Developed by: Imagitec Design
Released: 1994
Platform: Atari Jaguar
It was the third installment of the Bubsy saga, being the only one that was released exclusively on the video game console Atari Jaguar. The title is a play on words that refers to Fractured Fairy Tales, a segment of the animated series The Rocky and Bullwinkle Show.

The game is very similar to the previous two, Bubsy in Claws Encounters of the Furred Kind and Bubsy 2. It develops on sidescrolling 2D platforms. While the objective of the game is still to overcome the levels, this game places greater emphasis on the puzzles games, a little more complicated to overcome the game.
As the title of the game leaves the imagination, the theme of the levels of the game is based on fairy tales, such as The Adventures of Alice in Wonderland, Jack and the Beanstalk, Ali Baba, Twenty thousand leagues of travel submarine and Hansel and Gretel.6 In the game, all these stories have been corrupted and Bubsy has to deal with these problems to protect the children of the world.
The game does not save the games, but it generates passwords so that the player can continue where he left off.

Bubsy in Fractured Furry Tales has received a lot of reviews of all kinds. Despite receiving a score of 6.4 / 10, Electronic Gaming Monthly said it was a great game, adding "The fans of Bubsy will love this edition of the famous bug, which will test the most veteran of the saga, due to its difficulty, the levels are immense and its details and sound are amazing." GamePro said that" Bubsy offered a lot of good things, but also bad ", citing their colorful graphics, but their bad animations, their good music but its bad sound effects, inconsistent control and collision detection. Next Generation said it was very colorful and visual, but too generic, concluding with: "It's not a bad game, but users may prefer Zool 2 , which is a bit more fun and innovative."
The retrospective criticisms were even more negative. IGN said that, despite being designed in fairy tales, the game was very forced, highlighting the loss of added elements in Bubsy 2, giving a feeling of emptiness in the game in general.12 Atari HQ was also critical with the game, citing a combination of bad controls and a lot of difficulty, prompting users to opt for the original Rayman, due to its superiority in graphics and sound.5 Some reviews rated it as very similar to its previous deliveries, rather mediocre.In addition, several reviewers said that their graphics were at the Super NES level.
The book Inside Electronic Game Design by Arnie Katz says that some 50,000 copies were sold in the first 6 months, after its release, reaching a total of only 60,000 copies.