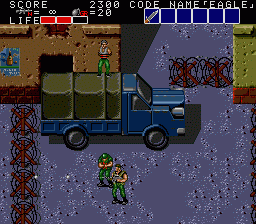 Genre: Action
Perspective: Top-down
Gameplay: Shooter
Narrative: Spy / Espionage
Published by: NEC Technologies
Developed by: Data East Corporation
Released: 1990
Platform: TurboGrafx / PC Engine
A very playable, bloody action. You will be a member of the Special Forces Bloody Wolf. You are sent to deal with the terrorists and release the hostages. Obviously in the game you will fight against the Americans, judge for yourself - terrorists in the form of US soldiers and armed with M-16, what else should they call them? You can take a ride on several types of transport: motorcycles, hummers, tanks, etc. A variety of weapons: from the M-16 ending with a bazooka. Japanese version: Narazumo no Sentou Butai.