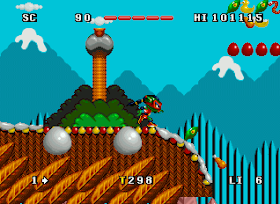 Genre: Action
Perspective: Side view
Visual: 2D scrolling
Gameplay: Arcade, Platform
Published by: Atari Corporation
Developed by: Gremlin Graphics Software Limited
Released: 1994
Platform: Atari Jaguar
Zool 2 is very similar to the original game, but with more cartoony and detailed graphics. Also added is the ability to play for the female counterpart of Zool, Zooz, which is armed with an energy whip. The game for both characters is the same, although there are some subtle differences in their abilities. Most notably, Zool is able to destroy parts of the landscapes that Zooz cannot, and vice versa, which resulted in a slightly different route through the levels. In the sequel, as in the original, there are several mini-games, such as the Breakout version, which uses the two-headed morph-dog Zool as a shutter.

The intergalactic Ninja gremlin Zool returns, and this time his enemies are the one whose name is Krull and his assistant Mental Bloc, whose goal is to stifle the imagination of the world, causing unbridled boredom. In a battle, Zool is helped by his companion named Zooz (in a red suit) and his faithful dog Zoon. The ending contained a hint of a possible further continuation.
‹
›
Home
View web version