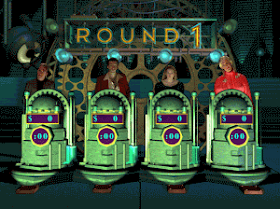 Genre: Educational, Puzzle, Strategy / Tactics
Perspective: 3rd-person
Visual: Fixed / Flip-screen
Art: Full Motion Video (FMV), Live action, Video backdrop
Pacing: Real-Time, Turn-based
Gameplay: Board Game, Game Show / Trivia / Quiz, Mental training, Mini-Games, Party Game, Tile Matching Puzzle, Timed Input
Interface: Point and Select
Educational: History
Setting: Cold War
Narrative: Comedy
Published by: Studio 3DO
Developed by: Studio 3DO
Released: 1995
Platform: 3DO Interactive Multiplayer
Our attention is represented by the game Zhadnost: The People's Party like a game show for Panasonic 3DO. In the game, the approximate time of the Cold War is mentioned both in 1963 and April 15, 2039. "Zhadnost" is a TV show with an ironic sense of humor.
A kind of a fictional small-scale Communist state of Bizzarnian, kidnaps people for participating in their most popular show "Zhadnost" on the state-run television channel. In the show, they have to play against each other fighting for their freedom. In the game you will not only answer questions, but also play a bunch of exciting mini-games.
The game supports up to 4 players. But what is very unusual in this game is that you need at least two players to play it.
The game is the ideological continuation of the game Twisted: The Game Show made in 1994 by the same studio Studio 3DO.
Initially, the working title of the game was The All New People's Game Show
Very interesting fact, if you read the first name in the game transcript into Russian, you get the word "Greed".
‹
›
Home
View web version