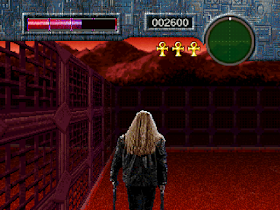 Genre: Action
Perspective: 1st-person, Behind view
Gameplay: Shooter
Setting: Sci-Fi / Futuristic
Published by: Data East USA
Developed by: Motivetime Ltd.
Released: 1994
Platform: 3DO Interactive Multiplayer
Virtuoso game for Panasonic 3DO as well as Johnny Bazookatone is dedicated to a rock musician, but this time it's not a 2D platformer, but a full-fledged pseudo 3D third-person shooter. In the game "Virtuoso" we have to act as a rock star, the game takes place in 2055. The life of the mega-star Rock & Roll in the 21st century is not what it used to be. We have to plunge into the world of virtual reality and visit such locations as: Mars, Haunted House, Marine. And it's all for fun Rock and Roll music.

The indicator of vital energy is located in the upper left corner of the screen. In the upper right corner is a radar (enabled if you can find it in one of the containers). The radar helps to notice the approach of still invisible objects. All enemies on the radar are marked with red dots.
Useful objects are hidden in black and yellow balls, which can be broken by a shot. In containers, you can find additional life (a purple ball with a heart), reward points (red, yellow, blue balls). The plates with the image of the explosion are irreplaceable if the enemies suddenly collide with a large group. Use explosions only in critical situations: you have exactly as many explosions as you collected them.
Each of the three missions consists of several successive sublevels. To exit (through the hatch in the floor) from the next zone, you need to find the appropriate key.
On Mars, try not to get lost in complicated labyrinths from mines, often ending in dead ends. Not only the radar signals the approach of the enemy, but also the scraping or rustling.
In the labyrinth of the space station, you can find the most powerful weapon - a blaster that shoots tracer blue and white lights. Here you can find a ladder - a teleport installation.
On the snowy plains, be careful not to fall into wormwood - you will lose your life. The targets here are a carved wicket, behind which a card is hidden, and a key in a separate tower. On the map, this tower is in the upper right corner.
The ultimate goal at the military base is the bunker at the top of the map. To get to it, move the cursor to the upper left corner, where Mars, Haunted House, Marine is written, and press the A button to select.
‹
›
Home
View web version