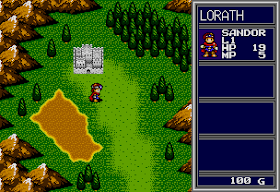 Genre: Role-Playing (RPG)
Perspective: 3rd-person, Top-down
Art: Anime / Manga
Setting: Fantasy
Published by: Working Designs
Developed by: SIMS Co
Released: 1994
Platform: SEGA CD / Mega-CD
The game is a traditional JRPG with all that relies on this genre of the game. A twisted and interesting plot, a battle system, etc. On the planet Vay in the kingdom of Lorath met the grand wedding of Sandor or Heibelger and his lover, the bride Elin. Guests from four neighboring kingdoms gathered. In the middle of their wedding ceremony, robots from outer space attack the castle. During the siege the castle turns into ruins, the bride Ellen is kidnapped (there's nothing to be done, such a custom / tradition). Most of the guests were killed. Now around the castle there are pools of blood and mountains of corpses. Sandor must save his beloved. This is where our adventure begins. During the game, he has a lot to find out and find out. There is an almost forgotten legend, that a thousand years ago somewhere in the galaxy an intergalactic war was taking place. And one of the robot pilots was killed, but the car itself remained intact, only lost its course. Also has got on the given planet, programmed only with one function - to kill. But the five magicians managed to stop this robot with the help of five magic balls of stones.
Our hero has to fight with various monsters, increasing experience and replenishing the gold reserve. You can also shop at various stores and meet new friends who will be your companions for a while. A total of up to 4 characters.
In Japan, the game came out under the name Vay: Ryuusei no Yoroi.
In the USA under the name Vay.
‹
›
Home
View web version