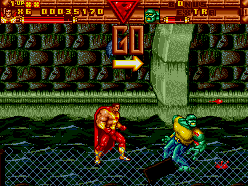 Genre: Action, Compilation
Perspective: 1st-person, Side view
Visual: 2D scrolling
Art: Video backdrop
Gameplay: Arcade, Beat 'em up / Brawler, Rail Shooter
Setting: Sci-Fi / Futuristic
Published by: Sony Imagesoft
Developed by: Malibu Interactive, Psygnosis Limited
Released: 1994
Platform: SEGA CD / Mega-CD
Ultraverse Prime is based on Prime comics from Malibu Graphics.
Interesting game of the genre Beat'em'up. Very similar to Street of Rage. The player is ruled by a thirteen-year-old boy named Kevin Green, who can be transformed into an adult thug (after some secret experiment). Your task is to save the girlfriend Kelly, who was kidnapped by evil creatures.
From enemies you knock out not only dope, but also all sorts of bonuses - hearts that treat you, stars that add points, weapons, etc. The game certainly does not reach the Street of Rage (there is a certain unfinishedness of the project), but still it is worth to see what happened to the developers.
Initially, Ultraverse Prime was prepared for SNES (even somewhere there is a prototype), but later changed their mind and the game was released only for Sega CD.
This game was in one box with Microcosm. On the disc with the game Ultraverse Prime was also an interview with the developers and several comics (which could be viewed).