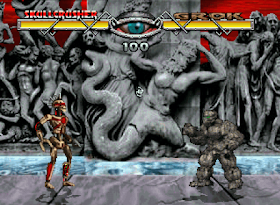 Genre: Action
Perspective: Side view
Gameplay: Fighting
Setting: Cyberpunk / Dark Sci-Fi
Published by: Atari Corporation
Developed by: Beyond Games
Released: 1995
Platform: Atari Jaguar
Developers from Atari, inspired by the cultious fighting game Mortal Kombat, decided to create something similar for the Atari Jaguar. And they got Ultra Vortek, a fighting game with a lot of violence and blood that got the age category from 17+. The actions of the game are unfolding in the future in such an anti-utopia. Where the population on the planet has significantly decreased, after discovering one mystical artifact. To all the technology so developed that people invented robots with intelligence to help themselves, and those after being in slavery for a couple of years rebelled. But also in the game there will be clones, mutants liquid terminator similar to T-1000, etc. The atmosphere of the game is permeated with occultism and esotericism. After some time, a mysterious creature appears like a demon called the Guardian. And declares that he will destroy the world, if there are no wars capable of defeating him in a deadly battle. In the end, the seven best fighters are chosen, which must compete with each other to determine the best. Who will fight with the Guardian himself in the opened "Ultra Vortek". And if he manages to win, he will gain strength, will decide the fate of the Earth. For each of the characters have their own endings.
‹
›
Home
View web version