The Perfect general (3DO) 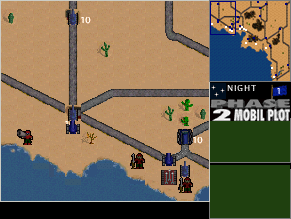 Genre: Strategy / Tactics
Perspective: Top-down
Pacing: Turn-based
Published by: Kirin Entertainment
Developed by: Game Guild
Released: 1996
Platform: 3DO Interactive Multiplayer
The Perfect General is a turn-based computer strategy game for one or two players developed in 1991 by Mark Baldwin, Bob Rakosky and Bruce Zaccagnino. It first appeared for Amiga and MS-DOS, five years later for the 3DO and another seven years later in a revised version for Windows. The aim of the game is the conquest of enemy cities with tanks or infantry units. Some scenarios are loosely based on battles of the Second World War. The game is one of the first online games ever and is one of the few computer games that have been sold commercially and online for over 20 years.

In The Perfect General, two players attempt to earn more victory points than their opponents on a tactical map by conquering terrain and cities. The game can be played either against a human opponent or a computer opponent.
Both players start with a number of purchase points determined by the particular scenario, which can be spent on infantry units (grenadiers, antitank or pioneer), armored vehicles (armored vehicles, spy tanks, tank destroyers or main battle tanks) or artillery (mobile, light or heavy artillery). In some scenarios additional purchase points can be earned or given as replenishment. The units are placed invisibly for the opponent within the starting regions specified by the scenario. The players play through each turn alternately several phases (setting up, aiming, firing, moving, firing), whereby the respective passive player has the possibility of firing on the sighting and reaching or shooting at him enemy units (back) , The firing or firing mechanism runs in real time and requires the attention and quick response of the passive player. Victory points for held cities and positions are awarded at the end of each turn. The game ends at the latest after a predetermined number of moves, or when the opponent has been completely destroyed before.
The units each have special abilities that make them particularly effective or vulnerable to a certain degree according to the principle of scissors, stone, paper against other units. They also differ in their mobility, which can be additionally influenced by terrain types and weather. There are some special rules that are only used in a few scenarios, such as: Eg landing on beaches or attacking neutral zones.
The game scenarios are not symmetrical and are therefore played twice for a match by default, whereby the players each play once as an attacker and once as a defender. At the end of a match the victory points obtained in both rounds are added together and the winner is determined.
Before each match numerous parameters can be set which influence the game balance. The game comes with an editor, with the own scenarios and limited also own rules can be created.
‹
›
Home
View web version