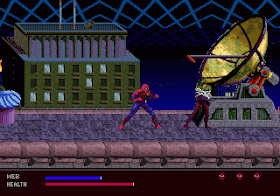 Genre: Action
Perspective: Side view
Gameplay: Fighting
Published by: SEGA of America
Developed by: BlueSky Software
Released: 1996
Platform: SEGA 32X
And here he is - a friendly neighbor Spider-Man. The city is entangled in a fiery web and only our hero has to find out who is behind this, and here Daredevil is in trouble. Jump, let the web, ride on it, crawl on the walls, shorter than an ordinary spider platformer, which has become a classic in recent times.

When the Sega Logo, along with Spiderman, appears, press the following: Up, Right, Left, A, Z, Y
During the game, press X to bring up the Debug Screen and the Level Select, press Y to display your current co-ordinates, and press Z to refill your daredevils and lives.
‹
›
Home
View web version