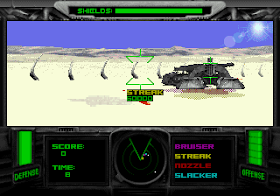 Genre: Action
Perspective: 1st-person
Gameplay: Arcade, Shooter
Setting: Sci-Fi / Futuristic
Vehicular: Tank
Published by: Time Warner Interactive
Developed by: Atari Games Corporation
Released: 1995
Platform: SEGA 32X
T-MEK fantastic game is something similar to the universe of Star Wars. The game is fought by flying ships, similar to tanks. This game is similar in principle to the game Twisted Metal, Vigilante 8 and other similar games. You choose one of the flying tanks and go to battle in the arena against five opponents, controlled by the CPU of the console. You climb up the career ladder, if you manage to destroy the enemies and accumulate enough points. In the game, in addition to standard weapons, there is a special weapon, it is also called a special. This weapon is several times more powerful than the stationary one. And it allows you to gain an advantage over the enemy. True AI opponent is not very good.
The game has a mode for two players. You can fight against each other, and in a cooperative. In general, there are a lot of game options. The game is made in 3D, here and there digitized sprites are used.
Unlock Ultra-Dark Mek: Up, Up, Up, Right, Down, Right, Left, Left
‹
›
Home
View web version