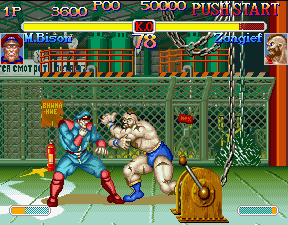 Genre: Action
Perspective: Side view
Visual: 2D scrolling, Fixed / Flip-screen
Gameplay: Fighting
Interface: Direct Control
Published by: Matsushita Electric Corporation of America
Developed by: Capcom Co.
Released: 1994
Platforms: 3DO Interactive Multiplayer, Arcade Machine, DOS
Super Street Fighter II Turbo is the fifth game in the sub-series of games Street Fighter 2. Initially, the game was released for a gaming machine based on the CP System II system. And later it was ported to 3DO Interactive Multiplayer, Sony PlayStation and Sega Saturn. Unlike previous games in the game there were super receptions (Super Combos). A new secret character of Akum appeared. Which after that began to appear in almost all of the fighting games from Capcom. From the usual "Street Fighter 2" game Super Turbo is distinguished by more dynamic fights, four additional characters, new locations for battles. Choose one of the 16 fighters and fight for the title of the best street fighter in the world with rivals from all corners of the earth. There is in this game and a character from the USSR called Zangief.
In Japan, the game was called Super Street Fighter II X: Grand Master Challenge.

How to play for Akuma

To play for Akumu, select the option "SUPER BATTLE" during the splash screen. Then, on the player selection screen, use the "Select Game Speed" option in the upper left corner to select (with the click of the hand) the speed you need (the recommended one is 3). Now place the cursor on the Ryu hero, hold for two seconds, and then move to the hero T. Hawk. Hold for 2 seconds and move left to Guile, stand on it from 2 seconds. (Some manage to miss the point with Guile, to achieve the same result.) Next, move to Cammy, passing through Dhalsim. Hold on to Cammy for 2 seconds and move straight to Ken (do not stop!), And then up to Ryu. Again, hold it for 2 seconds, and then press all three control buttons (the buttons for the impact) and the X button at the same time. If the Akuma's shadow replaced Ryu's portrait, the maneuver was a success, and now you can play for Akum.
In the "play two" mode ("VERSUS MODE"), it's easier to play for Akum. It is all right to press all three control buttons (for blows by hand, below - just blows) and three buttons designed for kicks (below - kicks), and keep them until both players select actors.

Combined super blow (vacuum "fireball") - ↓ + ↘ + → + ↓ + ↘ + → + any blow. "Fireball" hits up to five times, even if the target is located on the side
The first rushing punch with a fist - → + a heavy blow. Blocks a stopped enemy
The second rushing punch is a hard blow. Blocks opponents in any position
Air strike with two hits - (jump ⇨ or ) + strong blow

Combined super blow (double torpedo)
- ← + attack + → + ← + → - any blow. Two torpedo strikes with multiple defeats. You can practice the movements to apply such multiple impacts, but just hold the joystick in the "⇨" position. The combined super kick starts automatically when the button is pressed to strike and ends when you move the joystick & or press the kick button (kick)
Uchio-throw - ↓ + ↙ + ← + hard hit
Multiple stroke by hand - hit button repeatedly

Combined super strike (doubled Mexican typhoon) - movement at 720 degrees + any stroke
Dive - all three buttons for impact. Moves the joystick is not required