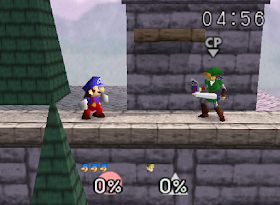 Genre: Action
Perspective: Side view
Gameplay: Fighting
Published by: Nintendo of America
Developed by: HAL Laboratory
Released: 1999
Platform: Nintendo 64 (N64)
What we just did not make Nintendo happy! What kind of heroes did not "feed" on their platforms! And in an alliance with another well-known office HAL Laboratory decided to unite many of its (and also the HAL) heroes in one "cartoon" fighting game. Quotes are not for nothing: after all, by and large, the game with graphics based on polygons can be called cartoonish only with a big stretch. Nevertheless, the cartoonish smells of the characters themselves, as well as of the atmosphere, which the game soars and flaunts.

The fact that the visual part of the game is based on polygons, says a lot. Let the number of polygons and their detailing in the fighters by today's (1997) standards. And does not strike, but it can be explained by the technical abilities of Nintendo 64, which, though by the power of "iron" and gives odds to the PlayStation itself, but before Dreamcast nevertheless does not hold out. In addition, we forget about the detailed background of arenas in full 3D. What about the camera? She is incredibly intelligent and chooses the right angle depending on the position of each player in the arena: if all of them are crowded in one area, the camera is approaching, if one or two of the fighters are on the opposite edge of the level, it moves away at the correct distance. Developers should applaud at least for this!
Visual effects such as fire, water, lava, electricity and magic are also striking in their beauty and sophistication, and are worthy of the power of Nintendo 64. Animation is certainly pleasing to the eye: every movement, every beat or jump is calculated to the smallest fraction of a second and beautifully set .
In short, the developers did not miscalculate with the orientation primarily on the polygonality of the game, for it is unlikely that SSB showed such visual beauty on sprite consoles. On the PlayStation better modestly to remain silent, because Nintendo with Sony long-standing differences, so it would be hardly worth hoping that the fighting game ported to the popular PS. But this conversation is no longer this article.

As expected, the music in each arena falls under its style: for example, in Mario's level, the same melody that we heard in almost every level of Super Mario Bros sounds. The only thing you can find fault with is that, due to the short duration of one "circle" of the music theater, they quickly become bored. However, this remark is nothing more than symbolic, for in a hot fight it is almost neglected. Sounds are also thought through to the smallest detail and in precise detail correspond to the actions.

At first glance, the control may seem uncomfortable, which is easy to explain: the location of buttons and analog levers on the N64-gamepad itself is not ideal. But adjusting it in the right way, you quickly get used to it and do not feel the discomfort that so confuses at first.
‹
›
Home
View web version