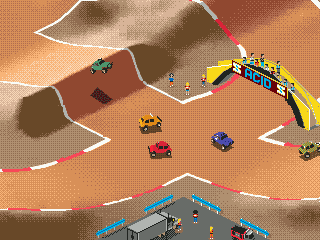 Genre: Racing / Driving
Perspective: Bird's-eye view
Visual: 2D scrolling
Interface: Direct Control
Vehicular: Automobile, Off-roading, Track Racing
Published by: Codemasters Software Company Limited
Developed by: Acid Software
Released: 1995
Platform: SEGA Genesis / Mega Drive
It seems that the success of "Micro Machines" before encouraged the dear to all of us firm Codemasters, that she decided not to stop and continue to develop the theme of small cars. After the first micromachines, the second part of this game was released, followed by "Micromachines Military", and now another immortal creation of the programmers of the company - Super Skidmarks (by the way, the PC owners recognized the game as "Iron man") appeared on the market. The game is pretty nice, anyway there is at least some new idea, which is so lacking in the series of micromachines.
The creators left the tiny cars, but changed the principle of the game. The essence of it, like any race, is to come to the finish (preferably the first). In principle, this is similar to the console version of "survival races". The route is visible from the side and from above (can not imagine? Do not worry - look at the pictures). If you think that speed and maneuverability is best realized in Micromachines, play Skidmarks, do not be disappointed.
Very impressive is the process of the race itself - cars rush like madmen, screech with brakes on turns, bounce on steep trampolines. In favor of the game says one more detail, so I appreciate and so rare - in the game you can croquer. Yes, yes, do not be surprised - it's bibikat, that is, your machine is capable of reproducing pretty loud sounds, in Russian, denoted in this way - "bi-bi". Now do you understand? Imagine what a thrill - you have been overtaken, and you to him - biiiiii-biiiiii! Cause does not help, but it's easier on the soul. The route runs through very rough terrain, so do not expect an easy walk in a straight line. In addition, due to the unevenness of the track, you can jump around a lot. Control, thanks to the 3D, it seems difficult, but it's not a problem - it will not take half a year, as you master the reverse (okay, do not beat it - it's a joke).
The only omission of programmers is the lack of accelerators in cars (NITRO), Do not know what that is? Then go and play further in Tetris. Shame what, where only modern youth is rolling. I explain, nitro is such a thing with the help of which the car can dramatically increase the speed and outrun the rivals. So, remember - in this game, NITRO is missing. Nevertheless, this does not interfere with pleasant pastime, so play and enjoy.
‹
›
Home
View web version