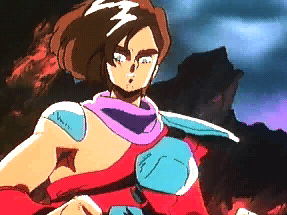 Genre: Action
Perspective: 3rd-person
Art: Anime / Manga, Full Motion Video (FMV)
Setting: Fantasy
Published by: Panasonic Software Company
Developed by: Media Entertainment Inc
Released: 1995
Platform: 3DO Interactive Multiplayer
How long, shortly, but still we got to the most real Japanese game, made in the most authentic Japanese style and generally published in real Japan, where did I get the license disk in my time? And this is not an interactive shooting gallery! Enough with us any of this video, it's time to move on to more abstract matter, I'm talking about animation naturally, because Strahl, despite this strange name, in fact, a normal interactive cartoon!
Although with the usual, I certainly hurried, because "ordinary" and "Japanese," two incompatible concepts. There is nothing ordinary in Strahl, well, except for the usual anime, and so everything else is completely unusual, and first of all, of course the plot. It's hard for me to talk about the plot in Russian, because both the instruction and the game in the samurai language, in the sense that I do not know anything in Japanese, and then Japanese, that language. But since we are dealing with a cartoon, then regardless of language, some basic storyline (and here it is the only one, and therefore the main one) can be understood. In this case, the main character runs around the worlds and locations, climbing through the falling sky and fighting with horrific monsters heart, looking for particles of himself and eventually through overcoming himself saves the whole world. Well, I'm so philosophical.
And if you do not have a philosophy, then the story and the game, just an eerie dynamic. The main character is being crushed not only by heavens and monsters, but the earth is falling under him, and every kind of magic, all sorts of seducers and seducers are sent to him. And you to somehow help him survive, like in any Dragon's Lair, should quickly and at the right time click on the same button. The whole cross, plus A and B, is involved. I do not remember anything about C, but I will get more and more B, because I have to press this button quickly and often, so that the progress bar appeared and the protagonist escaped from the arms of the man-eater, climbed to the rock, spread the rocks, etc. From the first time, by the way, it never turns out to pass (I have not seen yet such a person who Strahl passed the first time), and therefore will have to suffer.
On the torture there by the way give life (they seem to be three), plus more continuies, although at the expense of the number of the last, just not sure. In general, everything is done to ensure that you do not abandon the game without going through it. And correctly done, because it is the cartoon itself and the levels are varied, but there may be too much cruelty, but in the first place, the cartoon is Japanese, and secondly, it does not look like a child for children, although of course the children also play this game it is even possible, because now on TV, still a lot of cruelty is shown, but there is quite even such a cartoonish cruelty, and even with the plot underpinnings.
The fact that for 3DO Interactive Multiplayer was once created too many games with an abundance of digitized video material and actually built on this material gameplay, I'm not happy. But that's what was created and quite original interactive cartoons, like Brain Dead 13 or this Strahl, it's great. Because firstly it is clear that for each platform you need a variety of genres, and secondly, these games were still less than the video and they were better, because it's not for you to curl in front of the camera, but here you also draw must be able and the benefit of inept artists to participate in similar projects are usually not invited, that is, things turned out as a rule qualitative and had something to play, and it was interesting to play.
‹
›
Home
View web version