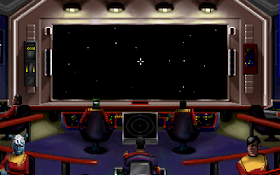 Genre: Simulation
Perspective: 1st-person
Gameplay: Shooter
Setting: Sci-Fi / Futuristic
Vehicular: Space Flight
Published by: Interplay Productions
Developed by: Interplay Productions
Released: 1995
Platform: SEGA 32X
Star Trek: Starfleet Academy - Starship Bridge Simulator is the very first simulator under the Starfleet Academy series, in 1997 for PCs and Macs the game was released, the more recognizable game ST: Starfleet Academy. The versions for the two consoles differ in the graphics - the 32X version is more beautiful, plus it has an additional mini-game Pool. But in SNES version there are cheat codes, which are opened by names from ST: The Original Series.
The gameplay is to switch between a lot of menus. For example, on a ship these are different systems, from a radar, to an alarm level on a ship or a database for items in the game. With the help of navigation, the ship is transported through the warp to the desired point on the map. There is even a system of communication. And many more. On the planet, this is all represented in the form of movement through the building (s). When you hit a certain room or room, the player again has to choose from the appeared menus the necessary action, etc. However, the ship is controlled manually, i.e. The player personally sets the direction of movement, without any choice through the menu. All this is decorated as a bridge of the starfleet ship. In front of the player is a large screen, which displays all the information, as well as the actions that make it feel like a real captain.
The plot - in the Klingon neutral zone there is tension, you as a cadet of the starry fleet of the Federation must perform a number of complex missions: from cargo delivery to the colony, bypassing the Klingon cordon, to research and diplomatic missions. Remember one wrong move and a war will begin in the region that will take billions of lives.
‹
›
Home
View web version